Nepotism in Malaysia Ended in 1997

Nepotism: noun. the practice among those with power or influence of favoring relatives or friends, especially by giving them jobs. 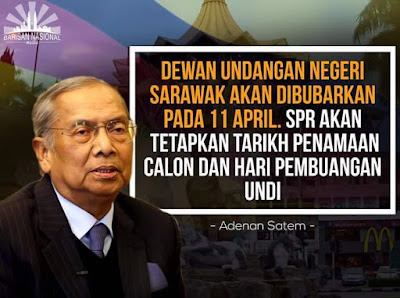 Translation: The Sarawak Legislative Assembly will dissolve on April 11. The Elections Commission will determine the nomination and election days.

Sarawak’s 2016 Elections are now moving faster. Chief Minister Adenan Satem announced at the press conference in Wisma Bapa Malaysia – Sarawak’s Seat of Government. Political aspirants started lobbying for their respective arty’s tickets months ago. Some take to Facebook to publicly record their efforts. As some incumbents seek to retire, their successors’ selections begin to be questioned by their adversaries. Once again “nepotism“, “cronyism“, and “dynasty” are the buzzword flavours of the week.

In an economy and democracy like Malaysia, the objections are really words meant to riled up emotions and fear. In fact no political party in Malaysia is free of nepotism, cronyism, and dynasty – except the Democratic Action Party (DAP), Parti Keadilan Rakyat (PKR), and Parti Islam Se-Malaysia (PAS). We should be proud that these former bed-partners in the dissolved Pakatan Rakyat has never and will never practice any form of favouritism in selecting their YBs and key decision makers.

An Observation from School

Yet these professionals love to practice nepotism and cronyism: if they are doctors who run their own clinic, they want at least one of their child to be trained in the UK, Russia, or India – by whatever means possible – so they may take over the clinic.

I’ve seen parents, working as engineers and managers in the oil & gas sectors, wanting their kids to be petrochemical engineers, instrumentation engineers, health & safety officers, or at least join the parents’ fields.

When the parents are lawyers, especially if the father is, the expectation is the kids will be sent to law school after passing SPM & A-Levels with flying colours. Earn their LL.B. in the UK’s top law schools and be admitted into one of the Inns of Court. Then return to Malaysia to either join Papa’s law firm, or Papa’s friend’s law firm.

It is worse when the parents run a business: they groom their kids to take over as eventual shareholders and directors. What about the staff who served in the last 20-30 years? Some are internal accountants, HR executives, and managers. Or those who rose from the rank-and-file? I dare say the rate of nepotism & cronyism is high among enterprises/sole proprietorship, partnerships, and private limited companies than public limited companies. Then again the later, you need a lot of capital and intrigue to succeed. A different ball game.

Rank-and-File, then Out Again 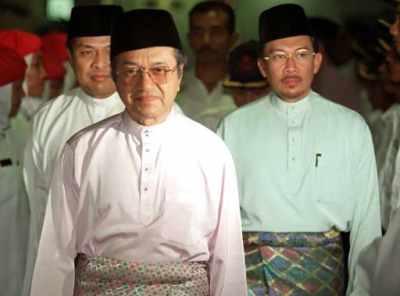 Coming back to 1997, it was the year Malaysia’s political scene matured. DAP, PAS, and what would be PKR took the bold step in rejecting politics of favouritism, blood relations, and political dynasty.

Anwar Ibrahim, was sacked by Mahathir Mohamad as Malaysia’s Deputy Prime Minister and Minister of Finance. Mahathir then appointed himself as Minister of Finance, and Abdullah Ahmad Badawi as Deputy Prime Minister. Some say Anwar realised the evil corruption of UMNO and BN, a party he rose from grassroots to eventually become Deputy President & Deputy Chairman, and sometimes becoming Acting Chairman. It proves that some things you cannot change from the inside – or does it?

A huge uproar happened. Many took to the streets of KL chanting “Reformasi”, “anti-nepotisme”, and “anti-kronisme”.

To fight the injustice and corruption of UMNO, Anwar started Parti Keadilan, which later merged with Parti Rakyat. The two entity became what we now know as Parti Keadilan Rakyat, or PKR.

After renouncing the evils of corruption and nepotism, the three bedfellows – PKR, DAP, & PAS – ensured that from 1997, it shall not and will not practice political advancement based on blood relations or relationship with the leaders. The three, known initially as Barisan Alternatif, are the pioneers of political meritocracy.

After almost twenty years, they continue to radiate and shine as the beacon of meritocracy.

Malaysians and non-Malaysians should appreciate that posts like these from the kualalumpurpost.net  (link) in 2012 are fabricated. Family relationships are purely coincidental.

In the words of PKR Secretary Tresurer, YB Tuan Rafizi Ramli as quoted by theAntDaily:

“Should we not learn from the Gandhi family? You cannot accuse them of nepotism because their struggle is for the oppressed and not of the elites.

“So why do you want to blast our (party) president and his family members for their involvement in politics?” Rafizi asked during PKR’s national congress in August last year.

I am not sure how one wants to define the oppressed; especially when proclaimed from gilded towers of wealth and luxury.

Where I stand in all this muck

Frankly speaking I couldn’t care less about a representative or politician’s family background and what they do in their private time. I am neither an angel nor a saint: I replaced a shareholder and director from my company (Converging Spheres Sdn Bhd) with my brother. I favour giving contracts and advocating friends I know well and can deliver the work at the expected level.

Two men who commit their hard-earned wealth to everyone but their family.

What irks me is when politicians play the dynasty card during elections. It is natural for us to keep some things in the family. How many politicians dare to commit a Conrad Hilton, Bill Gates, or Warren Buffett? I.e. 90% of their properties will be given to charity and denied to their own flesh and blood upon their death.

It is human nature to want the best for our children, friends, and family. The question is, as a voter and an elector, can the person deliver?

At the State level, I expect the Assembly Member (ADUN in Malay) to be able to raise local issues within the jurisdiction of the State Assembly. If he or she holds an executive position, either a State Minister or State Assistant Minister, I expect him to be able to deliver at two fronts: as a member of the executive and as an ADUN.

At the Parliamentary level, I expect my Member of Parliament (MP) to speak on local issues within the constitutional jurisdiction of the Malaysian Parliament. At the same time, to raise local issues of national interest by questioning and seeking the relevant Federal Minister.

For instance, the MP may ask the Defense Minister on measures to beef up the Royal Malaysian Navy presence along the shores of Sarawak. Or having the MPs sit with the Chinese Ambassador and Consul General to answer on the encroachment of Chinese vessels of the shores of Sarawak. Yes, as GST was passed by the Parliament, to raise issues about GST implementation in Sarawak.

Likewise in context of Federal and State relations, what can a Member of Parliament do when it comes to the customs and cultural issues of Sarawak? Does the whole nation need to discuss about customary rules and policies of the Bidayuhs and the Melanaus?

Whether an MP or an ADUN, I believe that they play an important role in engaging the business community and industries – whether within their constituencies or from outside. They were given a mandate by the voters and electors to become our voices. Surely then can approach big businesses, banks, and the like to discuss on the viability of opening a new branch in the district or division.

Both have a degree of influence with the Government agencies and department heads by virtue of their office – irrespective of their political affiliation. It is a matter of engagement, rapport creation, and trust building. No one – and I mean no one – wants to handle people who are on the offensive that barged into their office. Yes, you may be frustrated and irked by the bureaucracy. Have a word with the State Secretary or the Chief Secretary of the Government. Conduct goodwill meetings. Don’t just be sympathetic or be emphatic: be human.

Politics is a game where one party wants to keep power; and where the other covets it. Stop playing the minor issues and making a fuss about nothing. Show me policies and plans. You might have a chance to get my vote.

From the Manifesto, there is the “Economy”. What will you do about it? Why it matters? What are your focus areas?

One aspect of the Economy is “Budget Deficit”. What are the Lib Dems going to do about it? How is their assessment of the situation like? What can we expect in the next parliamentary term?

The political landscape is slowly changing. Mud-slinging ceramahs are entertaining for a lot of people out there. But will it go far? Are you communicating with us the full range of your policies, or are you just trying to discredit the other person?

How will we know there won’t be another “Kajang maneuver” or infighting after you have the keys handed to you?

Yes, you can show us the bungalows of these political dynasties. So what? Just because your house is smaller does not mean anything. There is no guarantee that you won’t use the “but they’ve done it before” card. Two wrongs do not make a right.

Before you talk about dismantling CMS Berhad, tell us what are you going to do about their 2,300+ employees and hundreds of contractors and their own employees. These are 2,300+ jobs created in Sarawak by Sarawakians.

In the past, you have condemned and criticised the use of the use of the State’s Autonomy and Authority. Why should we, the voters, hand such a powerful weapon to you? You said BN is a tool of UMNO. Yet, Pakatan Rakyat – in 2011 – needed KL’s approval for its State Shadow Cabinet:

Sarawak DAP secretary Chong Chieng Jen said on Wednesday the state PR should have the autonomy to decide on the shadow cabinet without interference from a peninsula partner.

He pointed out that since the shadow cabinet was set up for Sarawak, the state PR should be free to decide on the portfolios independently. “I don’t know whether Anwar has been fully briefed on the matter and I don’t think a matter such as the setting of a shadow cabinet needs approval from the peninsula,” he said.

Are you really ready to govern? Or do you just want a seating change, your QSGs, and your share of the grand titles and projects pie?