Skip to the content
Sarawak - Nationhood and Identity
February 23, 2016

Exhausted and Beaten at their own Game

Self-declared, disgruntled, champions are trying to make themselves heard, especially by the voters in/from Sarawak. At the forefront is the Federal Opposition group, the Pakatan Harapan, a loose coalition made out of:

In the battlefield, i.e. Sarawak, this Pakatan is killing the life out of each other. DAP and PKR fighting for the same seats.  Amanah trying to woo whatever fragments of pro-PAS supporters in the state. Making it worse, intra-party camps trying to be the next YBs throws the group into further disarray. I kid you not, especially the bad blood among PKR & DAP is carried by pro-Pakatan/anti-BN news portals: The Malaysian Insider (here) and Free Malaysia Today (here).

What the Pakatan overlords in Malaya forget is the people of Sarawak has a nationalist sentiment. Sarawakians continue to reminisce the by-gone era of the Brooke Kingdom of Sarawak and the time under the British.

Before the Japanese Empire invaded Sarawak, the 3rd Brooke Raja, Charles Vyner Brooke, signed into law a constitution. A constitution which places the absolute monarchy on the road to self-governance by the people. Sadly after WWII, the Kingdom could not afford to rebuild itself on its own. Sarawak became a crown colony and dependency of the British Empire. Sentiments of self-governance continue to linger among the people. Come 1963, when Sarawak formed the Federation of Malaysia with Singapore, Malaya, and North Borneo, the dreams of independence and self-sufficiency continued on.

Chief Minister Adnan Satem was quick to use the Sarawak for Sarawakians sentiment. But he did not come up with the idea. In fact it was the Sarawak United People’s Party (SUPP), which conceived and promoted it to oppose the formation of Malaysia.

In recent history, it wasn’t the CM who brought Sarawak’s special position into light. It was, ironically, former Deputy Prime Minister Anwar Ibrahim. After the 2008 General Elections, Anwar wanted Putrajaya so badly that he told the nation to anticipate mass defection. He promised certain MPs of the time that the autonomy of Sarawak and Sabah will be restored. (Anwar’s Blog in 2011)

PKR’s Deputy President Azmin Ali also echoed the sentiment in 2010, or as MalaysiaKini reports. In attacking then Chief Minister Taib Mahmud, the former promised “full autonomy”. Does he not know the meaning of Sarawak’s autonomy?

Sarawakians are aware of their special status within the Federation of Malaysia. Based on the Malaysia Agreement and the Federal Constitution passed and amended from 1963, we know we have the autonomy over immigration matters.

It took years for many franchises to enter Sarawak. We know that Malaysians from Sabah and West Malaysia require a work visa and passport to work in Sarawak. They need a passport to enter the State. Something many equality pundits have complained over the years. 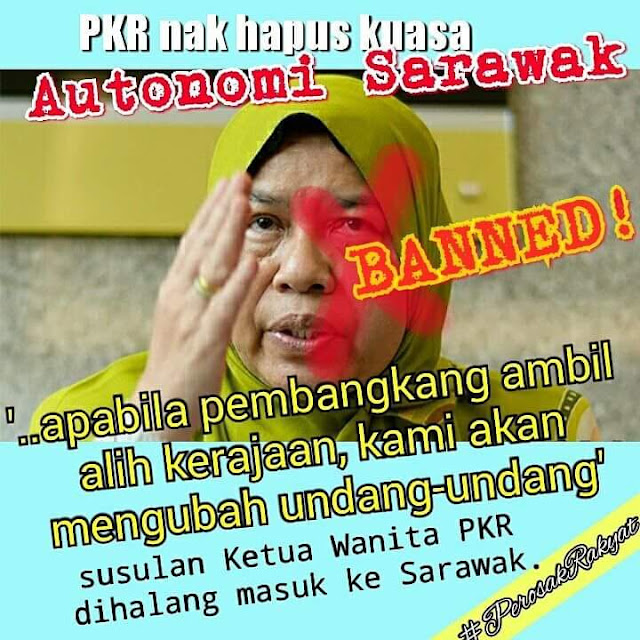 The Chief Minister’s Office (CMO) has declared many Malaysians as a persona non grata. The list include PKR’s Women’s Wing Chief Zuraida Kamaruddin and Teresa Kok of DAP. It also includes ultra-UMNO supporter Ridhuan Tee Abdullah and PERKASA’s Ibrahim Ali. After they were forced out of the State, Zuraida and Teresa made statements on modifying the immigration authority of Sarawak.

They claimed that the CMO has no right to prevent democratically elected Members of Parliament and State Legislative Assembly members from entering Sarawak. I agree that an MP or ADUN cannot be prohibited or obstructed from discharging their duties in their capacities as elected representatives; but I never recall either Zuraida or Teresa having a constituency in Sarawak. Zuraida is the duly elected Member of Parliament for Ampang. Teresa Kok holds both the office of MP for Seputeh and Selangor State Assembly Member for Kinrara. Or are Ampang, Kinrara, and Seputeh constituencies now in Sarawak?

While Sarawak DAP is doing its best to make headways into the of Rural Sarawak through its Impian Sarawak programme, their Malayan counterparts and colleagues are kicking sand in their faces.

Why Freeze Their Accounts?

Shortly after assuming office, the Chief Minister got the Malaysian Anti-Corruption Commission (MACC) to conduct Ops Gergaji against illegal timber and palm oil companies and operators.

Freezing company and individual accounts is common practice during a criminal investigation. The idea is to stop any money to be transferred out of that account by perpetrators.

But Sarawak DAP was unhappy about it. Freezing the accounts can affect the State’s economy its chief claimed. Instead, the MACC should go after those in the State Government!

Whoa… How narrow can your interpretation of corruption be, Mr. Chong?

In my view, corruption can happen outside the public service as well. When I offer a bank manager some incentive for approving my loan. Neither the bank manager nor I work with the Government. By law, it constitutes a crime! Why speak only on this matter, YB? What about hundreds of crimes and accounts froze not only by MACC, but also by the Narcotics and Vice Unit of PDRM? Your concern makes me wonder who you really represent, YB. Your electorate in Bandar Kuching and Kota Sentosa, or your hidden funders? Owh, sorry for being presumptive. I doubt DAP has funders. *rolls eyes*

Freezing 1,623 accounts purely based on beliefs that there were activities involving corruption and smuggling of diesel, cigarettes and liquor, without actual evidences, is just simply unfair and lack common sense.

Is the Honourable Gentleman shooting himself and his comrades in the foot? It pretty much sums the various accusations, claims, and assumptions that DAP, PAS, PKR, Amanah et al. threw against the Barisan Nasional!

In all the scandals which the Pakatan Rakyat and Pakatan Harapan has thrown towards either Federal or State Government, none have been proven beyond reasonable doubt in any court of law in any jurisdiction: from Blackouts to Altantuya to 1MDB et al.

It goes the same way: they complain that the Malaysian electoral system is unfair. Why don’t they repeat the same complain in 2013 when they won Selangor Darul Ehsan and Pulau Pinang?

Since 1MDB is being investigated in many jurisdiction: Singapore, the United Kingdom, Switerland, the United States, Australia etc, it is an opportunity for the Pakatan people to initiate class action there. Why not throw everything out into the open? I doubt that Prime Minister Najib Razak is the only one with connections outside Malaysian borders…